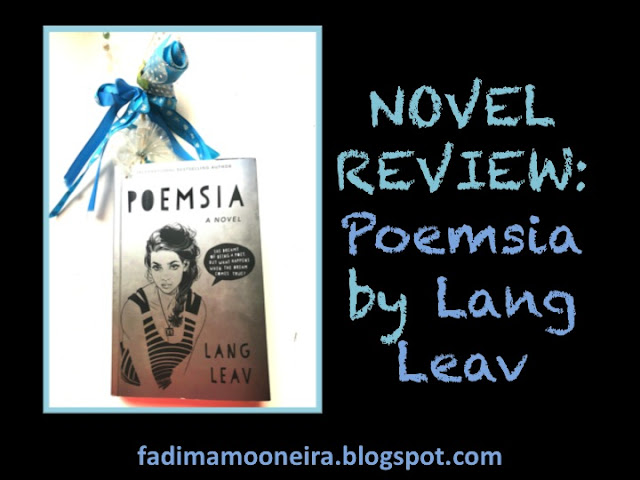 How are you guys doing? I hope everyone is doing great. I am back to share with you guys my review on a novel I just finished reading the last two days. The novel is titled "Poemsia", written by Lang Leav.

I purchased Poemsia at Popular Bookstore, Mid Valley Mall last December 2019. Before purchasing Poemsia, I read a lot of reviews and recommendations from my international fellow bloggers about the novel. Most of my fellow bloggers said the novel is a MUST read. Plus, Poemsia has been voted as one of the best novels in 2019 by the International Book Bloggers Community. Reading all the reviews and recommendations motivates me to purchase and read Poemsia. 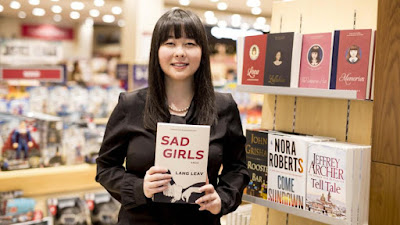 Before I start my summary about Poemsia, let me share with you a little summary about the author - Lang Leav. Lang Leav is a novelist and poet, who was born in a Thai Refugee Camp when her parents were fleeing from the Khmer Rouge Regime. Leav grew up in Sydney, Australia. Leav began her career as a writer and poet with her first poetry book- Love and Misadventure, published in 2013. The book was a big hit and a bestseller. Leav is now recognized as an international bestselling author. She has also won several writing awards such as Qantas Spirit of Youth Award, Churchill Fellowship, and Goodreads Choice Award. Her other poetry books include Love Looks Pretty On You, Sea Of Strangers, The Universe Of Us, Memories, and Lullabies. Poemsia is Leav's second novel, her first novel is titled, Sad Girls (2018). All Lang Leav's books were listed as bestsellers. 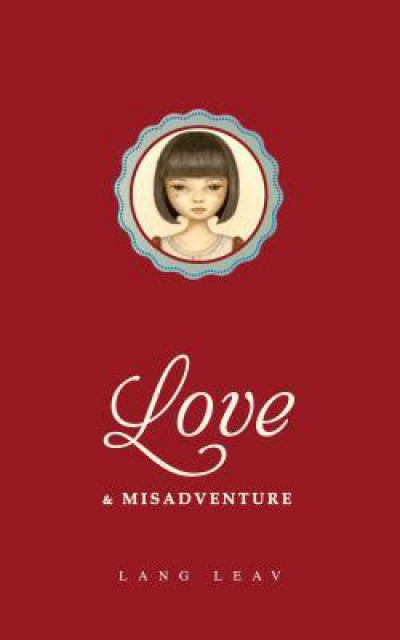 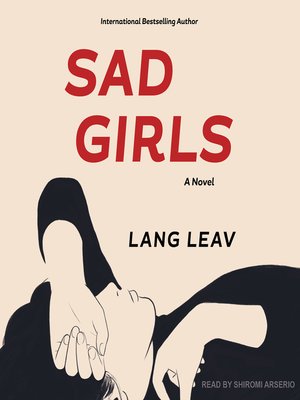 Poemsia tells a story about an orphan girl named Verity Wolf. Verity lost her parents in a tragic car accident when she was only 7 years old. After her parents died, Verity was raised by her grandparents - Pop (her grandfather) and Nan (her grandmother) in a small apartment above Pop's secondhand bookstore -Wolf Books. Growing up in a bookstore nurtured Verity's passion for poetry and creative writing. Verity always dreamed to become a famous poet like her idol -Meena Rhodes (a pop-poet who rose to fame from the social media). With social media, everyone can publish their work or arts like a speed train nowadays. At the beginning of Poemsia, Verity took her first step by publishing her work on Instagram after her BFF, Jess, highly encouraged her to do so. Besides her own poem, Verity also uploaded an 18th-century poem titled Poemsia on her Instagram as her inspiration and all-time favorite poem. She even mentioned in the caption as "not mine". However, not all Instagram users read your full post. Some just look at your picture. Most of Verity's followers think that Poemsia is her original work. Words spread fast. Verity became popular for Poemsia. She gained many followers on Instagram and became a star poet with just a blink.

Verity's life started to change gradually. She then met a cute guy named Sash, who became her boyfriend in the middle of the novel. Sash had a childhood friend, Penelope who was also his ex-girlfriend. Penelope was still in love with Sash. She became very angry and jealous of Verity. Penelope was always looking for a plan to ruin Verity's fame and career. Verity also met her idol- Meena Rhodes (she hosted a special talk show for Verity in New York), got her first book published, and met her Pop's favorite poet- Sal Dollinger towards the end of the novel.  Dollinger was famous before the world of social media existed. The senior poet signed an autograph book for Verity's grandfather. He also told her that the art of poetry writing nowadays has changed and not the same as during his time. During the old days, poetry writing was all about the craft of writing, where a poet's work got accepted for its quality, creativity, and art. Now social media has changed the game, all audiences are the critiques nowadays, and sadly, not all the time get their critiques right. With social media, even those who lacked passion and talent could get accepted because of something else. Sal Dollinger also did not think that Meena Rhodes was a true poet at heart. To Sal Dollinger, Meena was just a pop-poet who was glamourous for her image, style, and celebrity friends. But Verity was different. Sal Dollinger told Verity that she was a true poet and a gifted one. 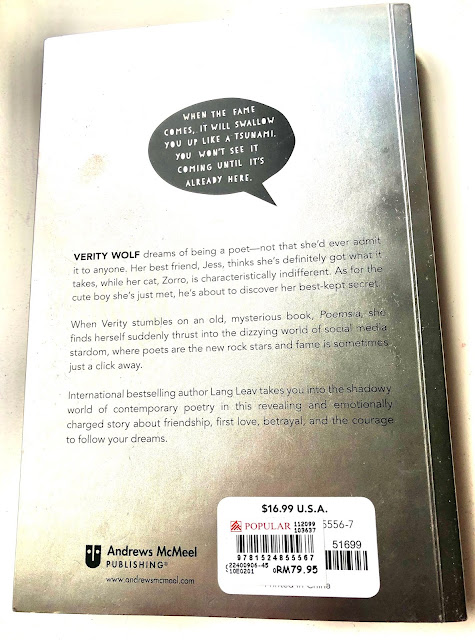 I started reading Poemsia five days before the new year. It took me three weeks to finish reading this novel. I really enjoyed reading Poemsia. To me, Poemsia is a very beautiful novel. The storyline is interesting, exciting, and fast. I think the author is very honest in her writing. I somehow feel that Poemsia is based on the author's life story. Leav is probably telling us how her life was like during her early days as a poet.

Like Verity Wolf, I also have a dream to become a writer and illustrator. I am also now marketing and promoting my works via social media -my blog, Instagram, Twitter, and Facebook Page. Reading Poemsia gives me knowledge about social media and ideas on how to market and promote my work online. Plus, Poemsia also paints me the big picture of how my life is gonna be if/when I become famous.

Leav describes it clearly that being a celebrity is not as sweet as it seems. Although celebrities and ordinary people are human beings, celebrities have a  different life compared to ordinary people. Ordinary people can enjoy their life the way they want, while celebrities have to be careful with everything they do. This reminds me of an episode of the Korean variety show Master in the House, where a well-known Korean veteran singer-songwriter (gee whiz, I can't quite remember who) said to Yook Sung Jae: "once you become a star, you must be able to walk on the ground with tip-toes". It's true because people judge you with all the things you do. Even tiny mistakes. In Poemsia, Meena Rhodes told Verity that once your fame began, the circle around you will change. Most people you're close with before will leave your circle. The author also mentioned that haters won't come to you when you first climb your ladder, they will start attacking you when you are already up there. I also feel that the author is trying to tell us and those who want to be famous and successful that if you want to be a star, you must be mentally prepared. If you have likers, you will also have haters.

Leav also tells us that there are three types of haters - the pseudo-intellectuals, fake haters, and hate readers. The pseudo-intellectuals are those who pretend to be intelligent and well-read, but no critical thought actually passes their heads. This type of haters only influences those who are dumber than them. Next are the fake haters. Fake haters are like school bullies. These types of haters don't simply hate your work. They just enjoy picking up on people. It's like bullying is their hobby or passion. Hate readers are the most dangerous type of haters. Hate readers are also influential people on social media. Hate readers have their followers and can turn your world upside-down. Like in Poemsia, Penelope was a hate reader. She was an influential book critique with many followers. Penelope can ruin a writer's life and career. Towards the end of Poemsia, Verity faced many hate comments from netizens after Penelope posted an article saying that Verity plagiarised an 18th-century poem- Poemsia. Netizens marked Verity as "fake". However, the author also tells us that hate can also contribute to a person's success. After Verity faced many hate comments, her book became a bestseller. Those who supported and sympathized with her bought her book and Verity got an offer from the publisher to write her second book.

Overall, I rate Poemsia 10/10. To me, Poemsia is one of the best novels I've read so far. Poemsia is now listed as one of my all-time favorite novels. I also have listed Lang Leav as one of my favorite authors alongside Louisa May Alcott, Jane Austen, Nicholas Sparks, and Kevin Kwan. In addition, I plan to read Leav's other books. I would like to recommend Poemsia to my fellow bookworms, writers, bloggers, influencers, and those in the mass-communication field. This novel will give you knowledge and ideas on what you plan to do and what you are doing.

Last but not least, I would like to wish Happy Chinese New Year to my friends celebrating. I hope you guys will have a wonderful time welcoming the Year of the Rat with family and loved ones. Thank you for reading this review.

FIVE REASONS TO READ THE BOY AT THE BACK OF THE CLASS BY ONJALI Q. RAÚF


Email Post
Labels: Book Review Edutainment
Fadima Mooneira
Fadima Mooneira is an author, content creator, blogger, and illustrator from Malaysia. She has an MBA in Marketing from the National University of Malaysia (UKM). Fadima also holds a BSC Hons in International Fashion Marketing from Manchester Metropolitan University. Fadima describes herself as artistic, creative, innovative, imaginative, and trendy. Fadima has a strong passion for creative writing and drawing. Fadima loves to write about lifestyle, pop-culture, edutainment, travel, and beauty. When it comes to drawing, Fadima loves to draw pretty girls, handsome boys, and cute things. As an author, Fadima has published three books - 2 collaborations (Sahabat, Kari Ayam Cinta) and one solo book (Book Of Lifestyle, Travel, Pop-Culture, and Edutainment). Fadima wishes and hopes to publish more books in 2021 and the whole future. Being a book author is her only dream. 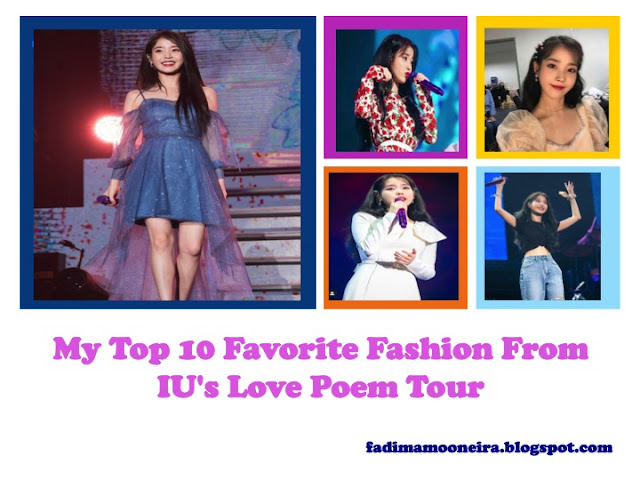 Fadima Mooneira
Fadima Mooneira is an author, content creator, blogger, and illustrator from Malaysia. She has an MBA in Marketing from the National University of Malaysia (UKM). Fadima also holds a BSC Hons in International Fashion Marketing from Manchester Metropolitan University. Fadima describes herself as artistic, creative, innovative, imaginative, and trendy. Fadima has a strong passion for creative writing and drawing. Fadima loves to write about lifestyle, pop-culture, edutainment, travel, and beauty. When it comes to drawing, Fadima loves to draw pretty girls, handsome boys, and cute things. As an author, Fadima has published three books - 2 collaborations (Sahabat, Kari Ayam Cinta) and one solo book (Book Of Lifestyle, Travel, Pop-Culture, and Edutainment). Fadima wishes and hopes to publish more books in 2021 and the whole future. Being a book author is her only dream.

Kari Ayam Cinta - My second collaboration with Pn. Sri Diah. I also collaborated with Super Daddy and 40 other authors for this book. Kari Ayam Cinta is a book of short stories and recipes.